Koa Ridge: A Community to Live, Grow and Thrive
Hawai'i Home + Remodeling Magazine - August 25, 2021
"A new area in Central Oahu, dubbed Koa Ridge, is the first of its kind here in the Islands. The master-planned community will have wide open, walkable spaces — including a 7 ½-mile shared-use path... Koa Ridge gives way to a new “surban” type of living, where urban and suburban spaces come together..." ...more

Charles Kaneshiro Discusses Creativity in Architecture and Passion for Health & Wellness
Hawai'i Business Magazine - March 8, 2021
"[Charles Kaneshiro, President and COO of G70] shares conversations G70 has made with the i-ON group, Queens hospital and Wahiawa hospital regarding their development of the new Koa Ridge medical campus and plans to make it a ‘hospital of the future’." ...more

Queen's partners on planned Koa Ridge medical campus
Pacific Business News - January 27, 2021
"The medical campus is planned for 16 acres along Ka Uka Boulevard next to a 30-acre commercial center that will be across from Costco that will serve as the gateway to the 3,500-home Koa Ridge master-planned community." ...more

For the People of Hawaiʽi
DDC Journal - Winter 2020 Issue
"On the heels of its wildly successful Mililani community on the island of O'ahu, master planner and real estate firm Castle & Cooke Hawaiʽi is forging ahead on a new master-planned community that keeps Hawaiian citizens at the forefront." ...more

Castle & Cooke Hawaiʽi launches sales of first commercial lots at Koa Ridge
Pacific Business News - December 18, 2020
"The land is located between the first residential areas of Koa Ridge — separated by a landscaped buffer zone — and the area planned for a medical center that will include a new hospital." ...more

At long last, Koa Ridge welcomes its first family after over 20 years
Star Advertiser - November 21, 2020
"It’s been a long road, but the master-planned community of Koa Ridge in Waipio finally welcomed its first family Friday." ...more

Koa Ridge to finally offer homes for sale in July
Star Advertiser - June 28, 2020
"COVID-19 is depressing Hawaiʽi’s housing market, but the developer of Koa Ridge in Central Oahu is very eager to sell homes after more than 20 years of planning the new community." ...more

View the Homes
Explore the Lifestyle
Contact a Sales Representative 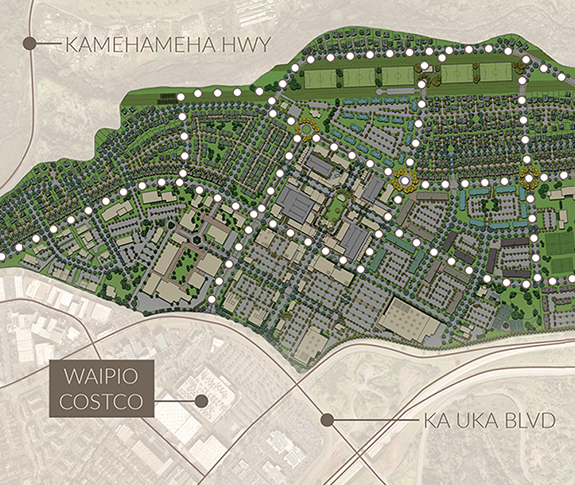 Ho‘ala Trail is a 7.5-mile interconnected pedway that will provide residents with the option to walk or bike to parks, services, and amenities located throughout Koa Ridge. It’s both convenient and healthy.